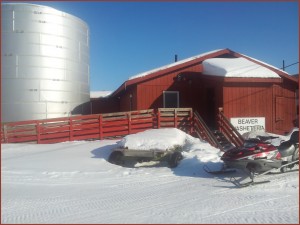 Although we don’t have the actual data: an annual 97% fuel savings was reported by a Beaver Village resident who claimed their consumption was reduced from 12,000 gallons/yr to only 400 gallons/yr!

By capturing the waste heat off their diesel generators, the team of AllTherm/SolarLogic, Alaska BTU and Lars Construction has helped the village save tens of thousands of dollars annually. 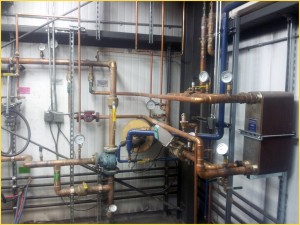 With the price of heating oil at $10/gallon and all electricity provided by commercial generators using expensive diesel fuel, energy efficiency is a priority for the remote and off-grid Village of Beaver, Alaska. Close to the Arctic Circle, the Native American community of 84 people holds many buildings and utilities in common. Since the upgrade in May 2015, heat and hot water for several of the common facilities have been provided solely by this waste heat. Waste heat recapture has boosted the efficiency of the gensets from 20% to 60%! The work was done by a joint venture of Alaska BTU, Michael Hirt, mechanical contractor out of Fairbanks, and Lars Construction – Rex Goolsby, a general contractor out of Tok. 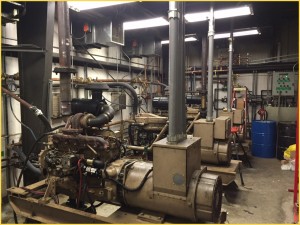 The Village of Beaver Energy Efficiency Upgrade, a project in two phases, upgrades a district heating system, combining a diverse collection of hydronic heating loads and multiple heat sources for a group of existing community buildings. Phase I is operational and includes two heat sources: One EK System 2000 boiler and one or more of the three generators that previously dumped their “waste heat” to the atmosphere but now is captured in a 3,000 gallon highly insulated storage tank. Loads include:

It also provides freeze protection for a 60,000 gallon water storage tank and 551 linear foot underground utilidor which is a corridor providing access to water, sewer and other utility networks to the local school. Phase II (stubbed out but not completed) includes the addition of a biomass boiler, a conventional boiler and banks of solar heat collectors. These additional sources will be combined with the Phase I sources and loads, and additional space and water heating loads in the Tribal Clinic and offices. 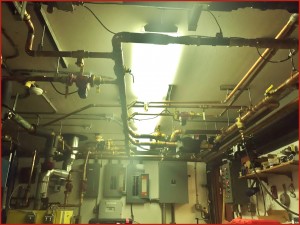 This allows the entire system to be controlled by a standard SLIC control system without any custom modifications.This SLIC moves any excess heat to the storage tank and then uses it where and when it’s needed most. It also allows all the heat sources and all the heat loads to be controlled, monitored and adjusted over the local village computer network, and provides for remote monitoring and control via the internet. In this way, a high level of energy management and technical assistance can be provided in real time to this remote and isolated location.

In a Report From the Field, Michael Hirt has shared that: “Phase II will be the renovation of the Village Council bldg to a primary loop and SLIC system, which will combine with the first system to take advantage of further waste heat that occurs during periods where outside temperatures are above -20 F. In other words, when the 3,000 gallon tank is full of BTUs and there is no demand from phase I loads, the generators continue to cool to the outside, wasting their energy. The boiler in the Village Council building is burning fuel needlessly. It may mean that both buildings will require their boilers to engage at -20 F and then again may both still go to approx -25 F before they need to. Until the generators stop cooling to the outside there is still energy to re-direct to the inside. We only know that phase one fully consumes the excess heat at -25 F. These figures will also vary with electrical consumption of the village. Typically, consumption goes up the colder it gets but it still will vary our results.”