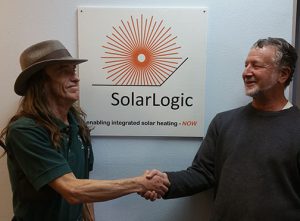 The agreement represents an expanded offering for Sun Fire, a company currently offering the best and latest technology in solar products. Owner Gary Sullivan lauds the deal as another way to serve his clients with the most advanced solutions available in solar thermal heating. The Sonoma County Region will also benefit from having an experienced and knowledgeable provider of solar thermal heating who they can trust to implement the SLIC for their home or other buildings.

Congratulations Gary! We wish the best for you and your clients. 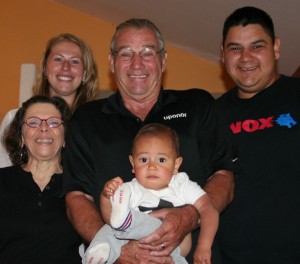 Wow! They’ve done it again! Two years in a row, father and son team, Stephen and Adam Skelton of Malachite Plumbing and Radiant Heating have won the AllTherm / SolarLogic Installer of the Year Award! We welcome Riley Skelton, the newest plumber-in-training, who is also shown with his Mom, Kayleigh & Grandmother, Susan. 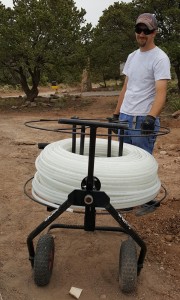 They service the huge geographic area of Northern New Mexico and have clients that are both on- and off-grid.

Stephen and Adam would like to call attention to their great and supportive assistant, Jeremiah Shelley. He has been working with Malachite Plumbing for two years.

Click here to see the entire newsletter in which they were featured.

Click here to read the Santa Fe New Mexican’s article about Mike Straight’s Santa Fe startup. His FarmPod prototype, is a common-sense solution to food deserts. He came up with the  idea of putting a fully automated aquaponics system inside a shipping container. The garden is on the top and the fish are below. Water containing the fish’s waste is pumped up to the greenhouse on the second floor, where it trickles down through the vertical towers, feeding the roots of young plants. The clean water circulates back to the fish. We wish Mike great success with his new venture!

May 2015
Malachite Plumbing, SolarLogic’s Installer of the Year 2014 was featured in TecHome Contractor Magazine!

June 2014
SolarLogic Partners with Sandia National Labs to Advance Solar Thermal Hot Water Market. Click the link to find out more about the product under development: a solar thermal domestic hot water system that is easy to install, has web-based control and monitoring, provides accurate energy measurements and security against Legionairres’ disease…all for the right price.

April 2014
SolarLogic’s SLIC controller is featured in an episode of DIY Network’s Building Alaska series. The home under construction is in a remote part of Alaska. The hydronic heating system includes both solar thermal (installed by Kerry Gronewald and his team from Alaska) and a geothermal heat pump (installed by Chuck Renfro).

April 2, 2014
SolarLogic named “Green Business of the Year” by the Sustainable Santa Fe Commission. The award is for SolarLogic’s ongoing efforts to promote the renewable energy heating industry by developing leading-edge technology and training installers and building professionals nationally in the “New Standard” for green heating.

June 2012
SolarLogic will be exhibiting at the 2012 MREA Energy Fair (Midwest Renewable Energy Association) in mid June. Click here to check out the MREA website.

February 2012
SolarLogic will be at the COSEIA (Colorado Solar Energy Industries Association) conference in Loveland – Colorado’s largest B2B event.  Come by our booth if you’re attending.

May 2009
First SolarLogic Installer Training.
SolarLogic continues on its trajectory to dramatically expand the solar heating market in the US by training a dozen installers on its renewable energy heating system heating controller, the SLIC.  In a day-long seminar and hands-on workshop the installers were taught to install, commission and maintain a SolarLogic heating system run by the SLIC.

March 2009
First Funding Round open.
SolarLogic LLC opens up membership to qualified investors in its start-up funding round.

May 2008
Intellectual Property Filed.  SolarLogic files its first intellectual property application covering the design concepts to be incorporated in the SLASH-D product.

May 2008
SolarLogic LLC founded.  Boaz Soifer and Bristol Stickney found SolarLogic to exploit and expand on the design and heating concepts developed by Bristol over decades.